What is the watermist suppression system- Automist? 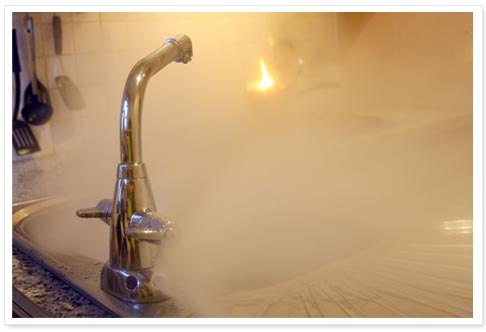 Automist is a sprinkler alternative for full room active fire protection. It offers freedom and flexibility to provide modern, contemporary, open-plan residential layouts with fire protection, whilst still complying with Building Regulations and the RRFSO. If you are a homeowner looking for peace of mind from kitchen fires, a fire inspector trying to prevent the risk of flashover on an escape route, or even a landlord looking to safeguard your tenants. Automist is changing the way people think about domestic fire protection.

There is an increasing demand for open-plan spaces, but fire safety rules and building regulations can make it difficult to get approval from building control. This watermist suppression system gives designers a number of active fire protection options to protect escape routes and aid evacuation for a fraction of the cost of a traditional sprinkler system.

How does the Automist suppression system work? 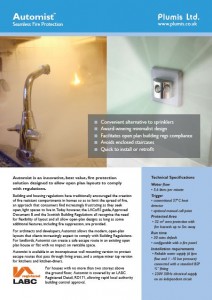 In the event of a fire, the watermist suppression system is triggered automatically by a heat alarm or a fire panel output. Heat detection is recommended for kitchens in Approved Document B, and effectively eliminates nuisance activation. Unlike conventional sprinklers systems, Automist can be stopped manually by pressing a button on its control panel. As Automist uses much less water than a traditional sprinkler system, water damage in the event of activation is minimised. Where desired, manual activation can also be provided through a manual call point.

Once triggered, an under-sink pump drives mains water through the unique nozzle unit, quickly filling the room volume with a dense fog. Water mist removes heat and displaces oxygen from the fire zone, resulting in fire control, suppression or extinguishment. The intention is to lower the temperature, lessen the radiative heat and reduce the oxygen concentration to such an extent that combustion can be longer be maintained, and therefore reducing damage and maintaining survivable conditions.

Adding water to a kitchen chip pan fire can greatly exacerbate the fire, the same is not true for water mist, as the updraught from the flame and the evaporation of the tiny droplets prevents water from reaching and collecting in the pan.

Watch this video below to see how Automist works:

Where can Automist be installed?

The Automist  emitter can be installed in a number of configurations:

James Dyson said of the device, after it won the James Dyson Award in 2009: “This simple but clever device should become a permanent safety feature in the home. Smoke alarms are an essential part of modern life but have remained fundamentally unchanged for forty years. Automist not only detects a fire but can put it out as well.”

The home is the place where we should all feel safest. While smoke alarms and fire extinguishers provide a crucial warning against fire, they require human intervention to prevent or stop the spread of a dangerous fire. In contrast, Automist offers active protection and is triggered automatically. It uses industrially validated watermist and was extensively tested and proven to be effective by BRE Global in Watford.

No False Alarms – Automist is triggered by a reliable heat alarm. Unlike smoke alarms (optical and ionisation), a heat alarm won’t go off accidentally even when cooking as it requires an ambient temperature 35˚C above typical room temperatures to be triggered.

Lack of disruption – Automist is easy to retrofit and can be installed in approximately 2 hours. Preparing the site may require an electrician with a Part P electrical qualification as Automist must not share a mains circuit or RCD with appliances and sockets in the same room

No Human Intervention – Automist triggers automatically. When faced with an uncontrolled fire it is best practice to “get out, stay out and dial 999”, as most individuals are not trained to deal with fires and could potentially face severe injury or death if their attempts to extinguish fires are unsuccessful.

Low Maintenance – The only maintenance is annual commissioning. During commissioning, the pump runs for approximately 20 seconds, whilst the nozzles are covered and the output pressure is monitored.

Prevent damage to your property – Automist can be used to protect fire hazards identified by a fire risk assessment. When a fire starts in a house it can spread quickly. Independent testing showed that Automist can quickly suppress and control fires, and in doing so it reduces the dangerous levels of toxic gas and temperatures. It utilises only 5% of the water usage of a traditional sprinkler system and therefore minimises consequential water damage and runoff.

Best value – Automist offers effective active watermist fire suppression, without many of the shortcomings of traditional sprinkler systems, such as high price, excess water damage on activation, and difficulty to install and maintain, which have prevented them from being cost effective in a domestic setting (Source: BRE report No. 204505 – “The effectiveness of sprinklers in residential premises”).

How Automist compares to other domestic and residential fire protection options? 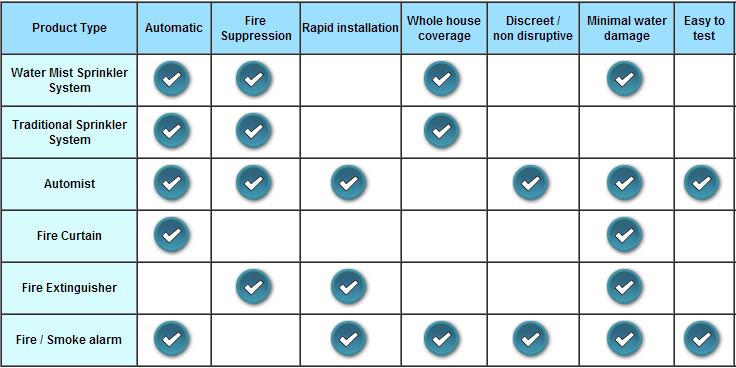 Call us on 01726 67372 if for more information on Automist and installing the watermist suppression system.